The South Now Leads the Home-Price Recovery
Seven of the 10 U.S. metros with the largest year-over-year price increases are in the South, including the top four: Miami, Birmingham, Lakeland-Winter Haven, and West Palm Beach. These 10 metros include markets where prices are now rising much faster than one year ago and markets where prices are slowing down. In the accelerating markets of Birmingham, West Palm Beach, and Palm Bay-Melbourne-Titusville, the year-over-year price gain in August 2013 was less than 5% and is now more than 13%. But in Riverside-San Bernardino, Atlanta, and Oakland, price gains have slowed significantly from more than 20% year-over-year in August 2013 to less than 14% now.

The housing markets with the slowest price increases (and, in four metros, decreases) are clustered in the Northeast, such as in upstate New York. Why is that? These markets had a mild housing bubble and bust last decade and therefore are now having only a slight price recovery; they’ve also had relatively weak job growth recently. 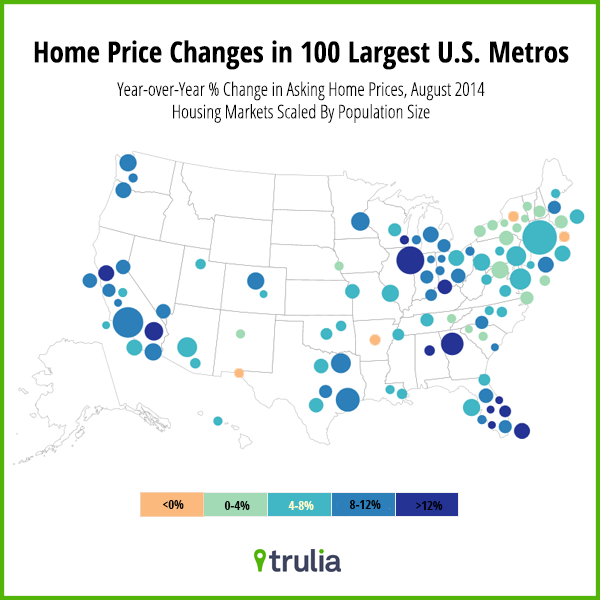 Among Harder-Hit Markets, Prices Rising Faster in Judicial States
Foreclosures have shaped where and when home prices have recovered. Foreclosed homes tend to depress neighboring home values and sell at a discount. But once most of the foreclosures in a market are sold, then overall inventory tightens – especially at the low end – giving home prices a boost. In states with a “non-judicial” foreclosure process (such as California, Michigan, and Texas), foreclosures don’t have to go through the courts. That means homes in non-judicial states are foreclosed and sold more quickly than in states with a “judicial” process (such as Florida, Illinois, and New York). As a result, the foreclosure wave cleared sooner and faster in non-judicial states, and housing markets in those states got an earlier and sharper price boost. 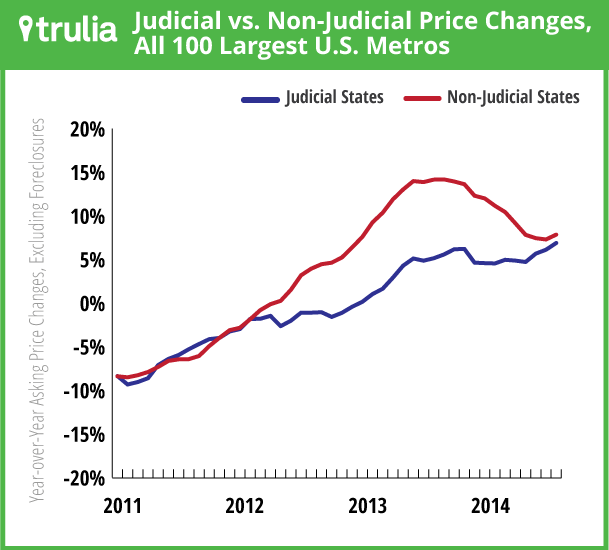 The above comparison between judicial and non-judicial states includes all 100 large metros. But in markets that had a mild housing bust, there were fewer foreclosures; in those markets we wouldn’t expect the home-price recovery to have been as affected by the foreclosure process as in harder-hit markets. Looking instead only at markets where prices dropped more than 25% during the bust, asking prices actually rose faster year-over-year in judicial states (10.6%) than in non-judicial states (8.3%). 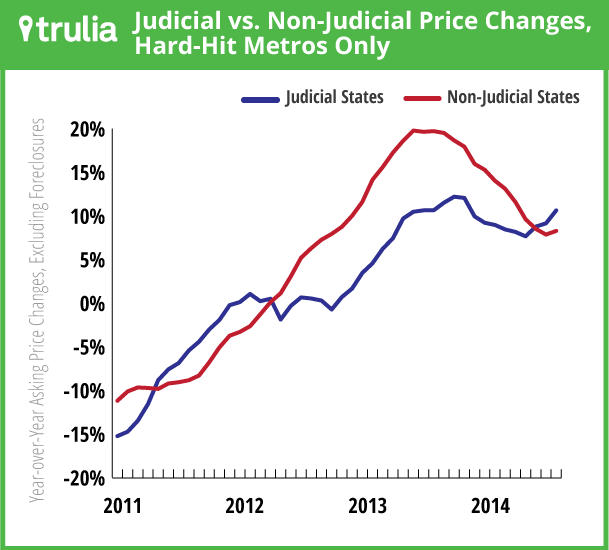 Rents Accelerate, Rising 6.3% Year-over-Year
In five of the 25 largest rental markets, rents rose more than 10% year-over-year. Three of these five are in northern California: Sacramento, San Francisco, and Oakland have the highest rent increases in the country, followed by Denver and Miami. Rents rose faster year-over-year in August than three months ago, in May, in 20 of the 25 largest rental markets. In August compared to May, rents accelerated most in Sacramento while cooling in San Diego.

If you are in the market to buy (or sell) a home in  Northern California, Realtors associated with Century 21 M&M look forward to walking you through the process. Rest assured that Century 21 M&M Realtors will do their best to make sure that both Buyers and Sellers are protected during the transaction.