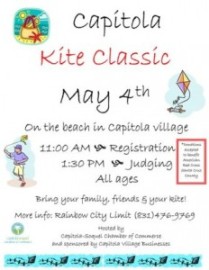 Bring your kite and let it fly over Capitola Beach. 11:00 AM Registration. 1:30 PM Judging. Open to all ages. Donations benefit American Red Cross. Sponsored by the Capitola Village & Wharf Businesses and Capitola-Soquel Chamber of Commerce.

David Sedaris is a best-selling author, playwright, commentator, and National Public Radio humorist. Sedaris was born on December 26, 1957. His first collection of short stories, entitled Barrel Fever: Stories and Essays, was published by Bay Back Books in 1994. The collection became a national best-seller and was selected as one of the Village Voice Literary Supplement’s Favorite Books of the Year. Barrell Fever, which targets the inane and soulful ridiculousness of modern life, was described by one critic as “so good and so naughty.” David Sedaris made his debut on National Public Radio’s show Morning Edition with an excerpt from the Santaland Diaries, which recounts his true experiences as an elf at Macy’s and was first published here. Read More…

An American In Paris 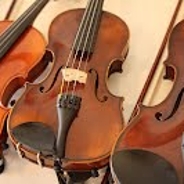 Our American sampler program offers us two city portraits: George Gershwin’s high-spirited visit to busy Paris streets and crowded cafes, and Bernstein‘s vision of New York’s excitement, brutality, and hope. They are prefaced by Cárdenes, Cuban-born Tchaikovsky Violin Competition winner, performing Korngold’s concerto. A musical prodigy, Korngold fled pre-war Vienna to the U.S, where he wrote movie scores (The Adventures of Robin Hood, The Sea Hawk) that revolutionized film music. After Hitler’s defeat, he returned to classical composition and wrote this concerto for Jascha Heifitz in 1945. Just as his great film scores are tone poems at heart, themes from his films permeate this richly romantic work. 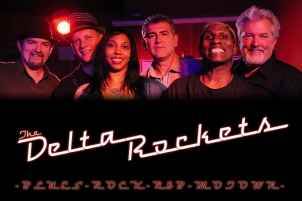 Town Square is alive with music once again on Friday nights! The downtown merchants are happy to sponsor this event with musicians from around Northern California and beyond!

Grab some great food from one of our local restaurants and enjoy the evening in the “Heart of the City”!

Starting as a band early in the year 2007, we have progressed quickly into a powerhouse musical ensemble capable of entertaining large crowds, small parties and events of nearly any size. If your party, venue or event needs good music you can dance to, including an entertaining mix of classic rock, old time blues, Motown and even a sprinkle of country, then give The Delta Rockets a call.

For over 30 years, The Fabulous Thunderbirds have been the quintessential American band. The group’s distinctive and powerful sound, influenced by a diversity of musical styles, manifested itself into a unique musical hybrid via such barnburners as “Tuff Enuff” and “Wrap It Up”. Co-founder Kim Wilson, the sole original member, still spearheads the group as it evolves into its newest incarnation.“We started as a straight blues band”, vocalist and harmonica player Wilson says. “We now incorporate a mixture of a lot of different styles. We’re an American music band and we’re much higher energy than we were before.”

In addition to Wilson, the current Thunderbirds line-up features Jay Moeller on drums, Johnny Moeller and Mike Keller on guitar, and Randy Bermudes on bass. 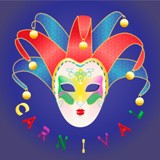 Friday, May 17 7:30p
Turlock Community Theatre Turlock, CA
Comedian Joan Rivers carves out her own niche in the entertainment industry: she’s a talker. In fact, she preempts most of her shtick with her trademark line “Can we talk?” A constant stream of one-liners, Rivers is instantly recognizable by her raspy voice, upturned nose, bob haircut, fashion sense, quick wit, and presence as commentator at high-profile celebrity awards ceremonies. She also conducts fashion reviews on the sensational celebrity “news” channel E! Entertainment Television.
Turlock Community Theatre ~ 1574 E. Canal Dr. Turlock, CA 95380 ~ (209) 668-1169

21+ event, lawn seating-bring your own lawn chair or blanket, outside drinks (including alcohol) not permitted.
Tickets and more information available www.ValleyJazzFest.com 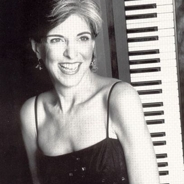 Pianist and singer/songwriter Marcia Ball is a living example of what happens when East Texas blues meets Southwest Louisiana swamp rock. Like any good gumbo recipe, Ball stirs together the best of her southern roots — equal parts zydeco, soulful swampy R&B and rollicking southern blues — to make into her own original and tasty sound.

Fleetwood Mac, one of rock’s most enduring, beloved and successful bands, will be embarking on a major 34-city US Tour after a three year break beginning April 4th, 2013. Fleetwood Mac Live 2013 arena tour includes stops in Philadelphia, New York City, Boston, Chicago and a special appearance at the historic Hollywood Bowl in Los Angeles.Multi Grammy-winning and Rock & Roll Hall of Fame inductees, Fleetwood Mac last toured in 2009 with the sold out Unleashed tour. The new tour also marks the 35th anniversary of the release of their classic Rumours album (1977), one of the most successful albums in recorded history with sales exceeding 40 million copies. Rumours planted itself at the top of the pop charts for over 31 weeks and had four top ten singles.To coincide with the tour and anniversary, a new deluxe reissue of Rumours with previously unreleased studio and live tracks will be released on January 29, 2013 from Rhino.
Event website

Saturday, May 25 8:00p
Gallo Center for the Arts Modesto, CA

A top-selling country music star since the mid-’80s, multi-talented Dwight Yoakam branched out into acting in the 1990s. Born in Kentucky, Yoakam was raised in Ohio and attended college at Ohio State University. Inspired by music since childhood, Yoakam dropped out of school to move to Nashville in the late ’70s. Finding the Nashville scene less than accommodating for his interpretation of country music, Yoakam subsequently headed to Los Angeles. Striking music gold with his first album in 1986, Yoakam became a renowned country-rock singer/songwriter of the ’80s and ’90s. Casting an eye on another facet of Los Angeles’ entertainment world, Yoakam began acting. After appearing on TV, Yoakam played a truck driver in John Dahl’s acclaimed neo-noir Red Rock West (1993); he then provided the music score for Red Rock West star Dennis Hopper’s 1994 comedy Chasers .

More dates & times (15)
Sacramento Convention Center: Sacramento Community Center Theater Sacramento, CA
Performer James Powell has been part of ’90s London stage productions such as Les Miserables and Listen to the Wind. He should not be confused with British recording artists such as the drummer James Powell — who is Georgie Fame’s son — or the soulful leader of Jimmy Powell & the Dimensions. ~ Eugene Chadbourne, Rovi 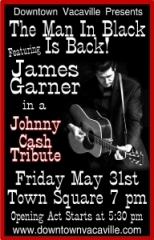 Friday, May 31st, 2013 |6:00 pm – 9:00 pm
The Cash Tribute Show is committed to presenting the Man in Black’s music with the original “Boom-Chicka-Boom” sound pioneered by Johnny Cash, Luther Perkins, and Marshall Grant in 1954.

From theaters and festivals to showrooms and prisons, audiences have reveled in the boom-chicka-boom sound recreated in this captivating, respectful and fun show. With more than 200 professional shows to its credit, James Garner’s Tribute to Johnny Cash is solidly established as one of the best tribute acts in the country.