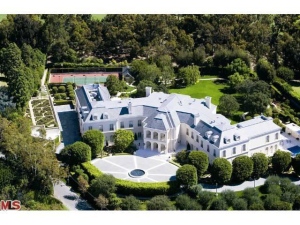 The long-running drama over the sale of the highest-priced home in the U.S. appears to be heading to its finale.

The 57,000-square foot Los Angeles mansion built by the late TV producer Aaron Spelling is slated for sale to a 22-year-old heiress to a Formula One racing fortune. The home on five acres of property in Holmby Hills has a bowling alley, beauty salon, several gift-wrapping rooms and parking for 100 cars.

“The Manor,” as the property is known, had a list price of $150 million that didn’t budge during the real-estate downturn that sent prices in Los Angeles down by more than a third. The sales price was not disclosed.

Homeowners who have resisted the urge to refinance their mortgages until now could be rewarded for their willpower. Mortgage rates have fallen to new lows—and banks are rolling out incentives to win business.

Economic uncertainty in Europe and slow growth in the U.S. are prompting investors to pile into ultrasafe U.S. Treasurys. That, in turn, is pushing down mortgage rates, which are tied to Treasurys.

The average interest rate on a 30-year mortgage fell to 4.05% for the week ended Dec. 23, the lowest in 60 years, according to HSH Associates, a mortgage-data firm. And rates on jumbo mortgages—private loans that in most parts of the country are larger than $417,000—also have hit new lows, averaging 4.61%.  Read More…

The year-end housing news is sobering — U.S. homes are expected to lose more than $681 billion in value in 2011. But there’s an upside — that’s 35 percent less than the $1.1 trillion lost in 2010, according to new research from Zillow, a real estate information marketplace.

What else did the research show? Just nine out of 128 markets analyzed had gains in values in 2011. Bragging rights go to the New Orleans area, where the gains were greatest at $3.5 billion. Pittsburgh claimed the number two spot with a gain of $2.7 billion. Read more…

The National Association of Home Builders/Wells Fargo builder sentiment index rose two points to 21 in December. That’s the highest level since May 2010. It’s just the second time the index has been at 20 or above in two years. Read More…

WASHINGTON — The long-suffering job market is ending the year better off than it began.

The number of people applying for unemployment benefits each week has dropped by 10 percent since January. The unemployment rate, 8.6 percent in November, is at its lowest level in nearly three years.

Factory output is rising, business owners say they’re more optimistic about hiring, and consumer confidence has jumped to its highest level since April. Even the beleaguered housing market is looking slightly better.

“We are ending the year on an up note,” says Joel Naroff, president of Naroff Economic Advisors.

Still, 25 million Americans remain out of work or unable to find full-time jobs. Most analysts forecast a stronger economy and job growth in 2012 — and rule out a second recession — but they caution that could change if Europe’s debt crisis worsens or consumers pull back on spending. Read more…

Century 21 M&M is here to help with all of your real estate needs. From Residential to Commercial to Ag & Ranch, feel free to give us a call, whether you plan on buying or selling in the coming weeks, or even months from now. Our qualified Realtors will address all of your concerns and walk with you step-by-step through the transaction process. Call today – 800-350-1548.